An elimination diet should last at least 4 weeks, with a recommended time span of 4 weeks, to allow time for all eliminated foods to be completely flushed out of your system. After the elimination period has passed, you can then begin to reintroduce the removed foods, one at a time, to determine which foods were causing your symptoms.

Sometimes the elimination period is enough for an intolerance to have dissipated entirely, and you can continue eating all foods that were removed from the diet initially, although this is usually not the case.

Who should do an Elimination Diet?

An elimination diet is ideal for anyone experiencing regular digestive symptoms such as constipation, gas, abdominal cramping, or bloating. It can also be useful for anyone suffering from constant fatigue, brain fog, or regular headaches. All of these are common symptoms of food intolerance.

An intolerance test guided elimination diet has also been shown to help alleviate symptoms of other conditions such as IBS and Ulcerative Colitis.

Approximately 80% of IBS patients report a specific food triggering their symptoms. A 2013 study concluded that an elimination diet based on an intolerance test could significantly reduce symptoms in IBS patients who also suffered from migraines. Thus, positively impacting their quality of life.

As more research is published, it’s becoming apparent that food intolerances play a part in various health conditions. And that the simple act of avoiding certain foods could be enough for many of us to live symptom-free.

Tips for a Successful Elimination Diet

It’s vital that you keep a food diary throughout your elimination diet and the reintroduction period. This will help you identify any problem foods that weren’t removed from the diet and keep track of those that are reintroduced as well. 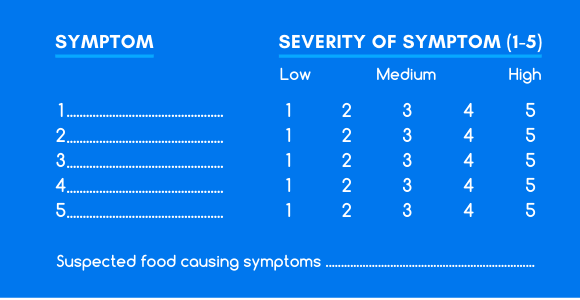 Using a symptom checker chart like this (pictured left) can help you keep track of symptoms and their severity. Giving your symptoms a severity number is useful for monitoring progress and in helping you narrow down on those foods which are the most problematic.

It also allows you to more accurately keep track of symptoms and understand whether they’re getting worse or better – as our memories can be unreliable with these things.

Simply write out the symptoms you are experiencing, circle the severity of those symptoms and make a note of the foods you suspect are the cause of your symptoms. You’ll quickly see some patterns and be able to adjust your diet accordingly.

Before you commence your elimination diet, we recommend that you take stock of what it is you’ll be removing from your diet and the nutrient that these foods are high in. You must ensure you aren’t removing the primary source of any vitamins or minerals. If, for example, you are eliminating fish, then it is vital that your diet still contains plenty of omega fatty acids. While it’s recommended that you get all of your vitamins and minerals from food rather than supplements, there are times when supplementation is necessary.

We recommend that your elimination diet is guided by an intolerance test rather than your own suspicions on which foods are causing your symptoms. Guiding your elimination diet with an intolerance test means you won’t be restricting your diet needlessly (and therefore risking a vitamin deficiency). It’s also a much more scientific method of getting rid of your symptoms. This can reduce the length of time it takes for you to alleviate symptoms and accelerate your route to a healthier, happier life.

The elimination diet should begin with removing everything highlighted in your intolerance test from your diet at once. Don’t try to remove one thing at a time, as this is what the reintroduction period is for. This is the most time-effective way to conduct the diet and will have you becoming symptom-free much sooner than If you were to eliminate the foods one at a time. And the symptoms are the reason you’re going through an elimination diet after all.

After the elimination period, you can slowly begin to reintroduce those foods which were removed. As intolerance symptoms can crop up anywhere from a few hours to two days after consumption, we recommend reintroducing one food at a time, every few days. This is where monitoring your food intake and symptoms is most important. Track what you eat and make a note of any recurring symptoms.

Start with small amounts of each food. Food intolerances are a digestive issue, meaning the more you eat of a food that you are intolerant too, the worse your symptoms often are. If you removed almonds from your diet, for example, have only a handful of them – may be less – and see how your body responds.

This stage is where you will pinpoint those foods which have been the biggest problem for you in the past and learn what your body can and can’t tolerate. You may also discover that your body can tolerate certain foods only in small quantities, which is helpful in itself.

As mentioned before, it is most effective for an elimination diet to be conducted following a food intolerance test in order to save time and alleviate symptoms as quickly as possible.

If you continue to use this site we will assume that you are happy. Read our privacy policy.